I have been exploring natural dyes for about a year now and I love how many different ways there are to work with natural dyes and how every time is still an experiment. Natural dyes are extremely variable in the quantity of dye matter and quantity of goods to be dyed as well as the freshness of the dye matter, the type, quantity, and process of the mordant, length of time in dye pot, etc! So many variables!

Mordant: substance which is used to bind pigment to materials such as iron or alum.

Mordanting is an important step of natural dyeing because without it, all the colour would wash out. There are three main ways to mordant a material. Pre mordanting – soaking a material in mordant and water before dyeing, this can take up to a few days. Mordanting while dyeing – adding mordant to the dye bath as you are dyeing. Post mordanting – soaking your material after dyeing to bind the pigment. Mordants change the colour of the dye depending on what type you use and the method that you use it.

Material: The material that you dye is important. Natural Dyes really only work on natural fibres. There are two categories: Plant fibres, such as cotton, bamboo, hemp, etc. and protein fibres such as wool or silk. Every fibre takes on colour differently so if you will get different results based on your material.

I decided to try dyeing with marigolds because they are abundant in Mexico right now with DÃ­a de los Muertos and I have never dyed with them before. At first I had trouble getting my hands on some because though they are in season right now, they don’t become available until a week before DÃ­a de los Muertos, as they are all used and consumed during the holiday. So they were unavailable and then available by the truckload in every market. It was a beautiful sight! All of a- sudden everything was marigold themed including ice cream which was actually delicious! 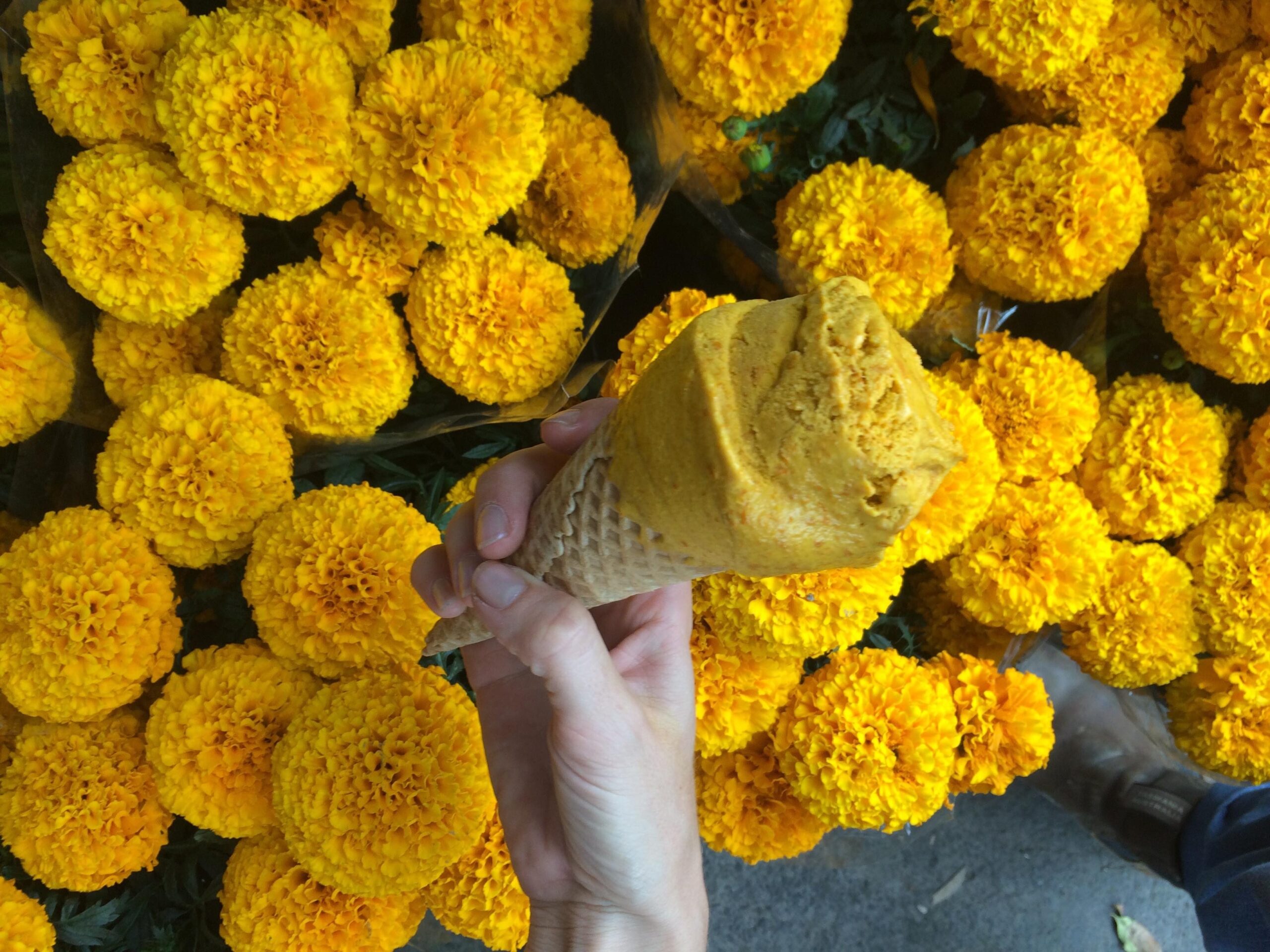 A few weeks ago I mentioned visiting a town called Teotitlan in Oaxaca that is famous for its beautifully naturally dyed and hand woven rugs. I was speaking to some of the women there about dyeing and I was able to buy some dried marigolds from them so my first dye bath was with dried marigolds. I had a hard time finding pure natural fibres to dye but as I have been living out of a backpack I thought my t-shirt could use an upgrade. This one was 100% silk. To find a mordant again was difficult because even though I had the Spanish word many people didn’t know what it meant. I ended up finding a rusted object that I put in the dye pot to soak up some of the iron. The hard part about this was that I couldn’t easily control how much iron I was adding or if it was even doing its job. I added the flowers, rusty object, and water and brought it to a boil. I let it simmer for an hour before adding the shirt and then simmer another hour. I removed the heat and let it sit over night.

The next morning, I checked on it and I think the iron had done its job a little too effectively as the colour was dulled out a lot. As a mordant iron is known to darken colours significantly, while alum brightens them.

A few days later I tried another bath without the iron and fresh flowers with some lime and salts to see if I could brighten the colour a bit. (I forgot to take a middle photo, sorry!!)

It was really interesting to visit the women in Teotitlan and see their process. Especially with the cochineal which I mentioned in my Opuntia cactus post. The cochineal is used often in natural dyeing because of its vibrancy and wide range of colours. For example if you add an acid to it like lime it goes a bright orange, whereas if you add baking soda, which is basic, it turns more of a dark purple. She gave us a really cool demonstration so we could see the differences.

I was asking the women about mordants and they said for marigolds they used a combination of Mezcal, limes, and salt. My Spanish wasn’t good enough to understand the quantities or process or else I would have tried that instead of my rusted object. The weavers in Teotitlan seem to have their dyeing practice down to much more of a science and know how to get each exact shade which is a feat from my personal experiences! 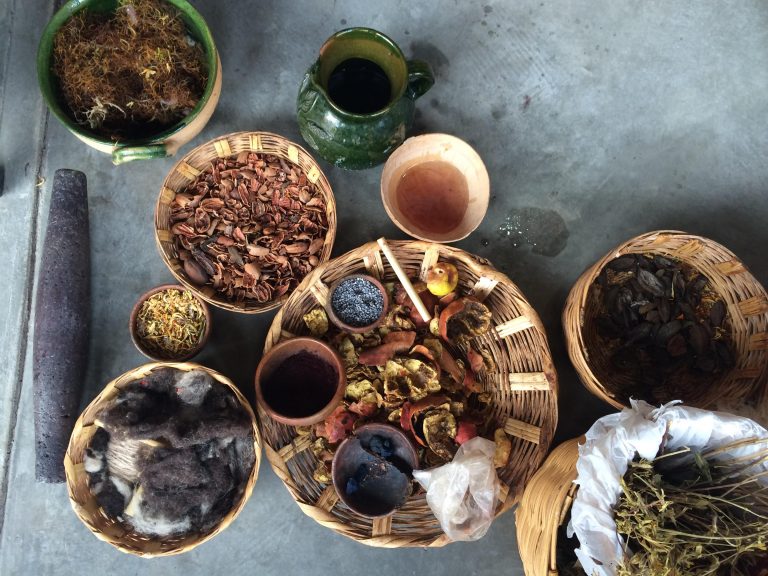