Acoma Blue Corn, Zea mays L. (Poaceae), has been part of the Southwest Indigenous diet for hundreds of years and is a staple in many of our dishes and differs from commercial hybrid dent corn as it is open pollinated and has low yields of 1,000-4,000 lbs per acre whereas hybrid dent corn yields 8,000-10,000 lbs per acre. Acoma Blue Corn in Keres is called yaak’a (Aaron Lowden) and was lost to the Acoma people in the 80’s due to more and more Acoma people leaving agricultural jobs to survive under capitalism and has only been brought back to Acoma lands within the past couple of years through seed rematriation. It was a difficult and lengthy process to get our plant relatives back from Native Seeds/SEARCH (NSS) where the Acoma blue corn seeds ended up after we lost them. After the Acoma blue corn is harvested traditionally, it would be roasted then ground up while songs are being sung into blue corn meal, kuu’ma’witz (Lowden),

“Each color of corn represents a cardinal direction for us: yellow to the north, blue to the west, red to the south, and white to the east. Those ears of corn literally represent our place in the world” -Aaron Lowden 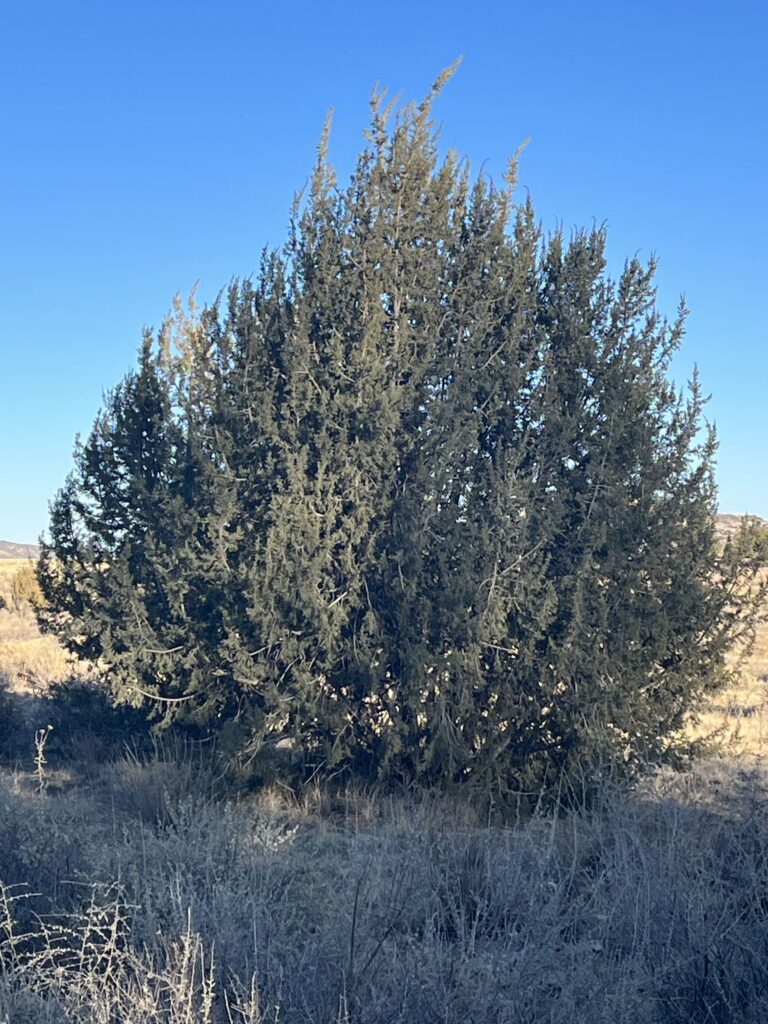 One-seed juniper, Juniperus monosperma E. (Cupressaceae) is the type of juniper tree that grows here in the Southwest. J. monosperma grows between 5,000-7,000 ft. in drier areas of the Southwest and it only grows six inches a year aboveground and can stop growth when in a drought but when moisture returns, growth resumes. Although it grows slowly above grounds, it below ground growth is much greater with mature trees have roots almost 200ft. long. Juniper ash is another staple of Southwest Indigenous diets as it has been a major source of calcium for many Indigenous people as many of us are lactose intolerant because of our until recent lack of access to dairy products. The J. monosperma is a very important tree to Pueblo people as its used for crafts, warmth, and traditional practices such as cleansing with smoke from the branches. It was traditionally used in the place of baking soda by Pueblo peoples and is most known for being part of blue corn mush commonly known as atole but in Keres is called hi’yaa’ni (Lowden).

“Juniper ash is an alkaline substance, and exposing it to corn initiates a process called ‘nixtamalization’. Nixtamalization breaks down the outer shell of the corn, enhancing flavor and increasing the amount of absorbable calcium, niacin, and vitamin B3” -Rachel Rummel

To begin making the hi’yaa’nii, my brother Zarek Joe helped me go get a juniper branch from our backyard and we had to cut away the leaves from the bark as the leaves were what we needed to make the ash for our dish.

We then had to burn the fresh leaves which took a while because they were fresh off of the tree and branch and ideally we would have cut a branch off and let the leaves get dry so it would be easier to burn. 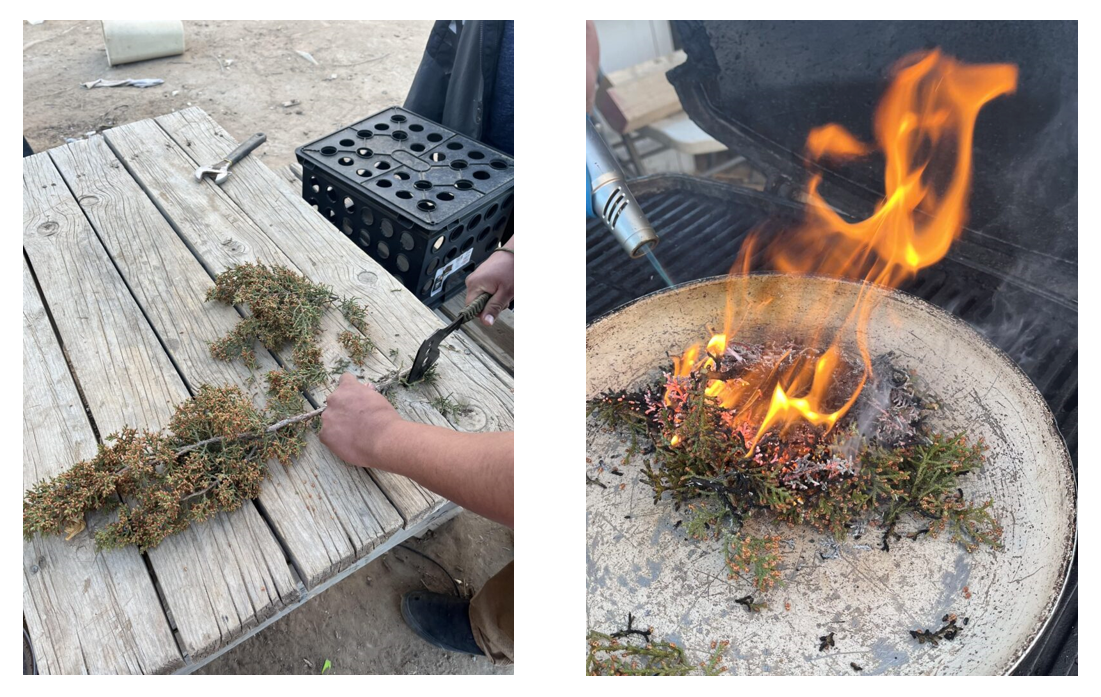 That entire branch was able to give us a couple teaspoons of juniper ash which we mixed with a cup and a half of pre-ground blue cornmeal. I wasn’t able to capture these next steps as it happened so fast but I mixed the dry cornmeal and ash in a bowl while water boiled on the stove, then I slowly started adding warm water to the cornmeal-ash mix in order to turn it into a pancake like batter consistency which you need to do before adding to the boiling water or it will clump up and be no good. Once it was smooth and batter-like and the water was boiling we quickly poured it into the boiling water and immediately started to stir it and kept consistently stirring it while it fluffed up and eventually got thicker (I stirred for maybe 4 minutes).

We were able to get this beautiful purple/greyish color from the Acoma blue corn and juniper ash mixing which we added sugar to in order to give it a slight sweet taste, sometimes hi’yaa’nii is made with lard and salt to make it a more savory stew topping but we added sugar to make it a semi-sweet thick drink that my whole family enjoyed. Although this was a fun project, it was also very insightful and made me remember how intelligent my ancestors were. This dish is not only very tasty but high in calcium and vitamin B3. I’m so glad I was able to make a traditional dish and honor the Blue Corn and Juniper Tree and welcome them back into my family as they have always been our plant relatives but can sometimes be forgotten by the younger generation in our ever changing world.

Seed rematriation is vital not only because of the cultural significance these plants have on and in our ancestral homelands but also because these are our plants relatives that were lost and/or stolen. Just the “simple” act of making blue corn mush with my brothers, including my little ones, brought us closer as a family as we were all doing our little parts and our mom and her sister smiled fondly at the smell of burning juniper they recalled from their childhoods. Plants aren’t just something we can use and take but relatives that hold a special place in our lives and in our memories just like human relatives.