When you pick it you say a little prayer, thanking the grass for letting us have some of it, and that we won’t abuse it ~ Maria Turnpaugh (Smithsonian, 2003).

There have been several scientific names for this plant in the past, but the current one is  Leymus mollis (Trin.) Pilg. Previously it was called  Elymus mollis, Leymus arenarius and Elymus arenarius.    The common names are just as confusing. There are species of Amomophilia that are confused with   L. mollis because “beach grass” is a shared common name (Wright, 1994),

Leymus is a general term for the genus of true grasses. Mollis is Latin, meaning “soft” (Definitions, 2018). For the purposes of this project, “beachgrass” is used as the common name, though there are many more:  dune grass, American dune grass, Iyme grass, beach ryegrass, sea Iymegrass, strand wheat, strand oats, wild wheat, sand-meal grass, dune wildrye, and beach wildrye. (Alaska Plant Materials, 1994.) There is even a cultivar named after the boy who designed the Alaska flag called “Benson” that was developed specifically to help with dune ecology (State of Alaska, 2018).

L. mollis is a perennial grass with rhizomes and erect stems standing up to 5′ tall. The leaves are alternate, simple, linear and glabrous with leaf blades 3′ long and 1/2″ wide and parallel venation. The inflorescence are terminal spikets containing up to six florets with flowers attached to the branches instead of the main axis. The glumes have “fine, thin hairs (pilose)” and are awnless. The seeds are typical of grasses; caryopsis or one-seeded fruit (achene) (Plant Database, 2018; Go Botany, 2018). 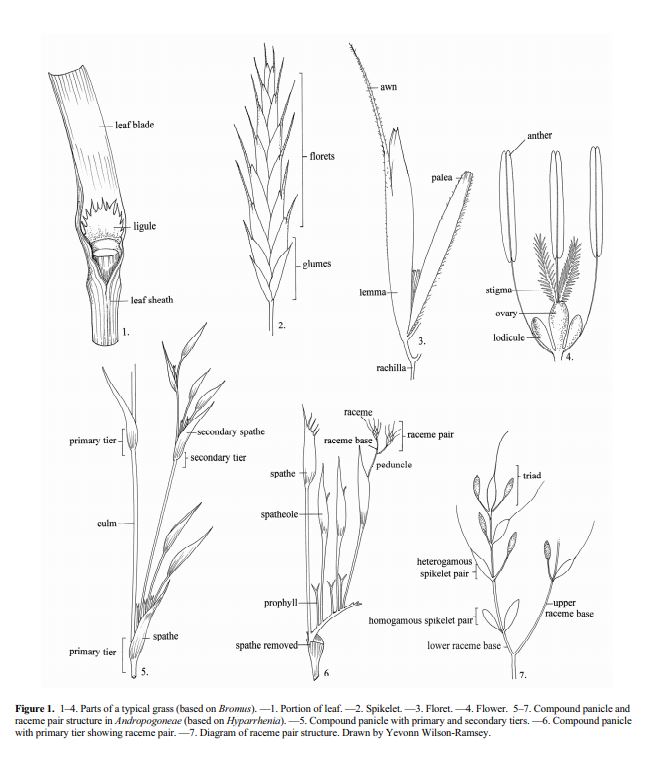 From Flora of Ethiopia and Eritrea, vol. 7 (1995) – drawn by Yevonn Wison-Ramsey

L. mollis is native to Asia, Russia, Greenland, Iceland and northern parts of North America with a habitat of coastal foredunes and developing dunes. They are  one of the first established plants in the process of dune ecological succession and can withstand wind, water, ice, salt, minimal fresh water, the unstable sand of dunes and few nutrients (Wright, 1994).

“Baskets…are a manifestation of a people’s history, origins and relationship to other entities in their universe” – Turner, 1996 (Petkau, 2002 pg 6).

For the purpose of this project, the focus will be on the baskets made by the Yup’ik people of Hooper Bay, Alaska. However, a brief look at the ethnobotany of beachgrass baskets in general is helpful in understanding the diversity of style and culture associated with basketry.

A small book,  Alaska Baskets, was privately published in 1917 by the Beaver Club of Oregon. It reviews the monograph of Violet Virginia Cavana, who went to Alaska in 1897 and lived there for seven years doing research on the art of basket-making (Cavana, 1917, pg 9). She studied a variety of techniques and materials from the people living in southeastern Alaska (Haida and Tlingit) to the Aleulian Islands (Aleuts.) She noted that the Haida use cedar bark, spruce and cedar root and weave mainly in a checkerboard pattern. The Aleuts are known for using “wild rye grass,” like the Yup’ik people of the Yukon-Kuskokwim Delta (Cavana, 1917, pg. 14).

Karen Petkau noted the variation in style in her article that reviews the baskets made by the indigenous people of the Pacific Northwest. Baskets have a utilitarian purpose, but also reflect an individual’s artistic expression, family ties, and cultural traditions.   She also wrote about the land where the people live and their beliefs. For example, the Nlaka’pamux people of the lower Thompson River and the upper Fraser River believe that Coyote brought the art of basket making to the people.

Although there are many styles of baskets from many different materials, coiled baskets seem to be the most popular due to being easy and quick to make. Molly Lee has studied the Yup’ik style of coiled basket-making and states that it became popular as a method in the late 1880’s when the Moravian missionaries encouraged the women to make baskets as a source of income. Coiled baskets (mingqaaq) soon replaced traditional twined grass baskets (issran.) This method also made sturdier baskets for transporting and allowed for more decorative potential. The issran is still made and used, but the mingqaaq is what is sold to the public (Lee, 2004, pg 58).

The popularity of hand-made baskets was initiated by a group of Americans who were opposed to the industrialization that was overtaking the country. They idealized the past and wanted to preserve it. Lee states that this anti-modernism attitude, called the American Arts and Crafts movement, came from a group of “women of the educated, democratic-minded, upper middle class who sought to combat their mounting alienation by promotion of communally-based handicrafts” (Lee, 2003, pg 20). She also states that by “re-contextualizing it as a symbol of anti-modernism, collectors endowed it with an aura of sacredness” and postulates that it was because of a “quest for spiritual connection brought on by the waning power of Protestant Christianity” with the “rise in industrialization, immigration and urbanism” (Lee, 2003, pp 19-20).

In reality, “Native Americans regarded their baskets as largely, if not exclusively, utilitarian”   (Lee, 2013, pg 19). There was a time between 1920 and 1960, after the American Arts and Crafts movement had faded, that basket making had “virtually disappeared among Native American groups.” It was kept alive by groups like the Boy Scouts and teaching of ethnographic “how-to” classes (Lee, 2003. pg 20).

Basketry is a commercial endeavor, however it is still “closely tied to the subsistence way of life practiced by Yup’ik women” (Lee, 2004, pg 59). The women still harvest in communal groups and share with others who have migrated to the urban areas, which helps bind the past with the present, preserve their way of life and maintain their sense of identity as a subsistence culture. It also provides supplemental income for other necessities in our consumer-based world (Lee, 2004, pp 59-60).

The Yup’ik live in the western area of Alaska and the Inuvialuit live in the eastern area. Both have sea coasts with beachgrass and benefit from the use of it in several ways. According to research conducted by Robert Bandringa with the Inuvialuit, they use beachgrass as a food source (mouse cache), a chew plant (nutty taste), boot straw (insulation) and basketry (Bandingra, 2010, pp 87, 108, 212, 222). Beachgrass was the “principle plant used for weaving”  (Bandingra, 2010, pg 212).

In July of 2017, I participated in a field study in Hooper Bay, Alaska. It was coursework for the ethnobotany certification program at University of Alaska Fairbanks – Kuskokwim Campus. I was one of nine students from Alaska, Hawaii, Nebraska and Massachusetts who stayed seven days at the Hooper Bay School. We studied the plants of the tundra and met with the elders to discuss their traditional uses of plants.  I was able to interview three Yup’ik elder women who were adapt in the art of beachgrass basketry. They shared their knowledge with me and patiently helped me learn a little about their skills (Liester, 2017).

Maria Bell Sr., one of the elders in Hooper Bay, brought a traditional harvest basket made from beachgrass (an  issran) and let me try it on (while wearing my new kusbuk.) She did not mention the age of the basket, but said the market value of this type was about $2,000. Needless to say, I was extremely careful while wearing it (Liester, 2017).

The Yupik tradition also include masks. This mask is at the Bethel Museum (we stayed overnight in Bethel on the way to Hooper Bay) and is made from local beachgrass and trade beads.

The Yup’ik word for basket,  mingqaaq,  means “something that was sewn” (Smithsonian, 2003). Their technique for making baskets is with coiled bundles of beachgrass held together with perfectly spaced stitches, also made with beachgrass.  Dolores Kawagley and Maria M. Bell Sr. were my primary instructors for basket-weaving. They had similar instructions, but somewhat differing styles. Dolores makes tiny baskets earrings and Maria’s weaving style is bigger with intricate designs. Mary Tinker also helped with explaining how beachgrass is used to make braids for drying fish (Liester, 2017): 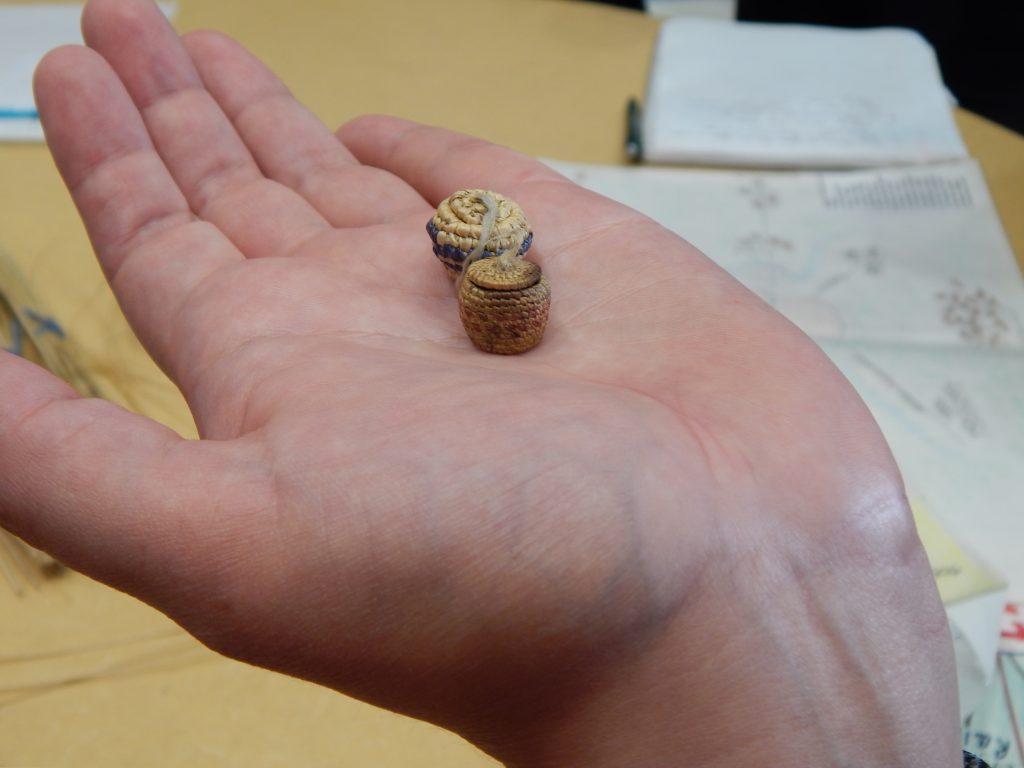 The first step in making a basket is to harvest the beachgrass, which is usually done in the fall. (I was there mid-summer, but the ladies brought some dried beachgrass to the school where we were staying for this project.) The next step is to dry it, which Maria explained was done by hanging in small bunches or putting it “between the couch cushions” (Liester, 2017).

Traditionally, plants were used to color the beachgrass for making patterns. Berries, alder bark, hemlock bark and wolf moss are a few mentioned by Cavana. Mud and ash were also used (Cavana, 1917, pg 30).

As ethnobotany students, we were interested in what plant material the elders in Hooper Bay used to make the dye for their beachgrass. Our reaction to their answer was very similar to this account by Maria Turnpaugh in an interview with Smithsonian Institute staff in 2003, one year prior to the opening of the National Museum of the American Indian in Washington D.C.:

“I saw these beautiful Hooper Bay [Yup’ik] baskets, and I was talking to an old lady and asked her how she dyed it that way. I just couldn’t figure out how beautiful they were, how shiny. She said Rit dye [laughs]. I was so disappointed. I thought I was going to learn something new”  (Smithsonian, 2003).

Maria showed me how to start a basket by making a knot at the end of a small bundle of grass where the needle is inserted to secure it. The process continues with coiling the bundle of grasses around the knot and using a single blade of beachgrass with even stitches. She also showed me how to split the blades of beachgrass with a needle to remove the edges, which makes them smooth and even for stitching. A weaver’s supplies include one bundle of beachgrass for coiling and another bundle for stitching, as well as a smooth needle (Liester, 2017).

Dolores showed me how to keep the curve of the basket sides flat by biting them. I learned there’s quite a bit of mouth-work in basket-making, from keeping the grass moist to keeping the sides flat. She also showed me how to add more beachgrass to the basket as the weaving progresses, but I didn’t get a photo of that step. The tip of the beachgrass is inserted, one blade per stitch, as the other blades get shorter (Liester, 2017).

I was only able to get a start on the basket while in Hooper Bay. It was was more important to spend time on the tundra with the plants and visit with the elders. As it turns out, I also neglected to get detailed instructions on how to weave the sides and finish the edge. I’ll either have to be satisfied with a shot glass coaster, adapt a way to finish it or visit Hooper Bay again. I’d prefer the later.

Lee, Molly. Not Making It: Formalism, Cultural Significance And The Study of Native American Basketry. Prepared for the Alaska Anthropological Association Annual Meeting Pane, “Making It: Merits and Demerits of Recreating Material Objects in the Anthropological Setting.” Convened by Margaret B. Blackman and Molly Lee, Fairbanks, AK: March 28. 2003

Petkau, Karen. Carrying A Culture: The Distinctive Regional Styles of Some Basket Making Nations in the Pacific Northwest. The Midden: Journal of the Archaeological Society of British Columbis. Volume 34/4. 2002. pp 6-9